Some light shines through the darkness in the form of an EPIC favor from WotC.

So, if you guys are huge tabletop gaming nerds like me, this whole quarantine thing has probably got you bummed. I mean, yea, the virtual tabletop options are pretty cool, and they work great, but it's just not the same as meeting up with a bunch of friends, buying fifty pounds of snacks, and rocking out against the Big Bad in the comfort of your friends living room. Well, apparently the dudes over at Wizards of the Coast felt our pain, because they just decided to do us a pretty cool favor. 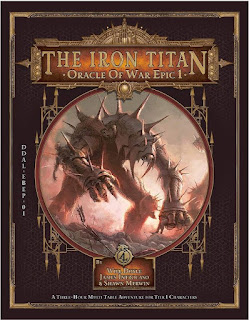 For the first time ever, Wizards is releasing one of their multi-table convention only(mostly) Adventurers League Epic adventures!


Ok, so whats this all about exactly? Lemme break it down for you guys. Firstly, for those of you who aren't familiar with it, the D&D Adventurers League is the ongoing organized play campaign that is officially sanctioned by Wizards of the Coast. What that means is that when you sign up for the adventurers league, WotC gives you your own adventurers number, and every time you play one of the official events, all of your characters adventures are tracked from game to game.

Wizards releases new adventures for the Adventurers League all the time and, for the most part, those adventures can be purchased and run by any aspiring DM for their favorite group of players, officially sanctioned or not. However, when it comes to conventions and other big events, they will often release these multi-table raid-like Epic adventures. Wizard's own description of these events reads...


"D&D Epics are exciting multi-table events where participants cooperate in a “mass raid” of truly EPIC proportions; as every table works toward the same goal, individual tables act as squads that might take on different tasks, possibly affecting other tables or unlocking side quests needed to progress the event."

What this all means is that for the first time ever, WotC is allowing anyone pick up and run this adventure. Not just the select few people approved to host convention games. So, if your eyes are having trouble adjusting to the sunlight after coming out of quarantine, you can pick up this adventure, gather 20-30 of your best friends, and run what would probably be the most over the top D&D game you've ever played at your own house.

You can snag yourself a copy of the PDF over at DMs Guild.

That said, if you're that person who has trouble getting more than four people in the same room at the same time more than once every 2 months, you can either keep an eye on our event page to see when we'll be running this magnificent gem of an adventure, or you can sign up for our email list to be notified when were taking sign ups.

Either way, if you choose to give this adventure a go, you've bound to have a great time.