Getting together with Great Flats Brewing for an awesome Game Night

In my opinion, nothing pairs better with beer than board games. Having friends over, having a couple beers, and playing a few games of Coup, Flux, Red Dragon Inn, or Twilight Imperium has made for some of my favorite and most memorable nights.

But why should it stop with just me and my friends? That's why I decided to approach the good people at Great Flats Brewing to see if we could organize an amazing night full of beer, friends, and games that everyone in the community can join in on. And sure enough, we made it happen. 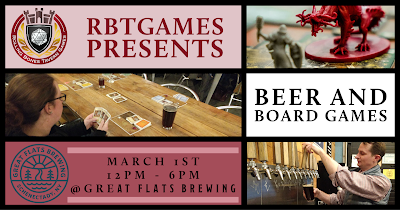 Ok, so whats the deal with this game night exactly? Well, lots.

First, the biggest part of the night is going to be our Red Dragon Inn tournament. If you haven't played Red Dragon Inn yet, you're missing out. It's a quick but fantastic game and the guys over at Slugfest Games keep making more and more awesome expansions for it on a yearly basis.

As far as the tournament rules go, it's gonna start with 3-6 tables with 3-5 players. Each table will duke it out and the winners from those table will go head to head in the final round. Great Flats has generously a round of beer for those who make it to the final game, and I'll be offering a copy of one version of the base game for the overall winner.

But if you're not a Red Dragon Inn fan, or tournaments aren't your thing, I'm also gonna haul a whole bunch of other board games with me so you can try whatever you'd like. I'll have solo games, two player games, social deduction games, dungeon crawlers, you name it. No, seriously, name it. If there's something you've been wanting to play but haven't had the time, shoot me a message on Facebook or the contact section of the website and let me know what you want to try. If I can get it, I'll bring it.

Lastly, I'll have the official Rolling Bones Tavern Adventurers Board set up with some quests for everyone to partake in. There may even be some cool quest rewards for those heroes strong enough to complete them.

If you're free, if you're in the area, if you like beer, board games, or just generally enjoy having fun, stop in and say hi.